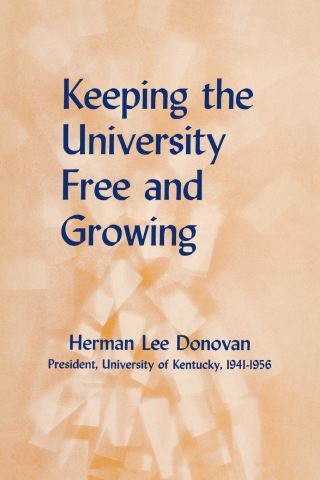 Keeping the University Free and Growing

During the fifteen years of Herman L. Donovan's presidency (1941-56), the University of Kentucky entered a new era of maturity as an educational institution.

The period was characterized by many administrative crises, such as those arising from the flood of veteran students following World War II, the rapidly rising costs of maintenance and expansion, and the apathy or active opposition of many Kentuckians to the concept of a free and developing university. Nevertheless, during this same period tremendous advances, both in material assets and in the less tangible qualities of academic life, were made.

Realizing that evaluation of his administration must wait for the perspective of future historians, Mr. Donovan has not undertaken a history of the University during his presidency. He has chosen, instead, to give his readers something which only he could give—an intimate view of the president's personal, day-to-day struggles during this crucial period of the University's history.

Mr. Donovan's account of the problems and satisfactions of being a university president is humorous and sincere. His story will be of absorbing interest to college administrators who face similar problems, and to all friends of the University of Kentucky. In addition, President Donovan has included a valuable appendix of statistical material which will be useful to the historian of higher education, and he has compiled a reading list of works of special interest to the college administrator.

Herman Lee Donovan: Herman L. Donovan was president of the University of Kentucky from 1941 to 1956.