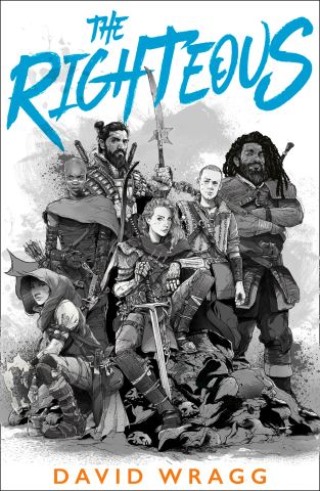 The Righteous (Articles of Faith, Book 2)

Rejoin fantasy’s most deadly and dysfunctional mercenaries in the sequel to debut sensation THE BLACK HAWKS.

Bound by oath and honour, Vedren Chel found himself drawn to the heart of a deadly rebellion. With him stood the mercenaries of the Black Hawk Company, who were only ever in it for the money.

But the uprising failed. Now, Chel and the sell-sword Rennic languish in prison, watching as their comrades are taken one by one for execution.

A daring escape will set them free, but with the combined forces of vengeful church and voracious crown arrayed against them, Chel and the Black Hawks must embark on a desperate search for new allies.

Journeying from frozen wastes to towering cities, from drug-riddled fleapits to opulent palaces, THE RIGHTEOUS is the thrilling and riotous second adventure from one of fantasy’s most exciting new voices.

Dave Wragg really got into writing stories just as he finished English GCSE, then took about twenty years to get back to it. In the meantime, he studied software engineering, worked in global shipping and technical consultancy, and once spent a year in the Foreign Office ‘hiding in the basement’.

He currently does Software Odd Jobs around central London. In his vanishingly rare free time (when not working, writing, or enjoying the fruits of parenthood), he tries to consume as much digital entertainment as possible, as well as reading genre fiction and enjoying the odd board game. Some of them are very odd indeed.