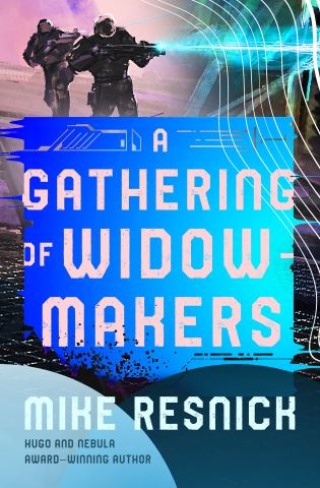 A Gathering of Widowmakers

When every version of the most lethal bounty hunter in the universe comes out to play, you get three times the action from the Hugo and Nebula Award–winning author.

He may be retired from the bounty hunting game, but Jefferson Nighthawk is still one of the three most dangerous men alive. The other two? His clones.

Trained by Nighthawk himself, Jeff can take down men no one else can. His one flaw is his mind. Jeff can only see in black and white, which leads to him killing an innocent man—and shooting another version of himself.

That would be Jason Newman, the second clone, the one who gave Nighthawk the peaceful future he’s now enjoying. He may have a new face and a new name, but he’s Nighthawk through and through, with the brains and humanity to match. Which is how he winds up on the wrong end of Jeff’s burner. Now, Jason’s in the hospital waiting for his organs to regenerate.

To teach the impulsive Jeff a lesson, Nighthawk lures him to a lawless planet where the galaxy’s most wanted are there for the taking. And where Jeff will learn how to match wits with both of the killers who came before him . . .

“Resnick is thought-provoking, imaginative . . . and above all galactically grand.” —Los Angeles Times