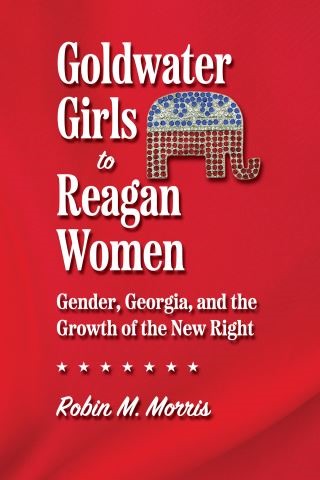 Gender, Georgia, and the Growth of the New Right

Goldwater Girls to Reagan Women is a statewide study of women’s part in the history of conservatism, the New Right, and the Republican Party in the state of Georgia. Robin M. Morris examines how the growth of the Republican Party in the 1960s and 1970s was due in large part to the political activism of white women. The book begins with the African American women who established the Georgia Federation of Republican Women and follows how they lost the organization and the party to white women moving to the Sunbelt South. Conservative white women developed a language and strategy of family values that they deployed to battle school busing, defeat the Equal Rights Amendment, and elect Republican leaders even in Jimmy Carter’s home state.

Morris uses original interviews and archival research in personal papers of women activists in the Georgia New Right movement, including Lee Ague Miller, Beth Callaway, Kathryn Dunaway, Lee Wysong, and Hattie Greene, to reveal the motivations and actions that transformed the state from blue to red. In this era, perceived threats to family life and traditional values spurred women-led grassroots organization that enabled broad political shifts on the state level. Conservative women carved out their political niche as they consolidated and expanded their power and influence. Rather than a male-dominated, top-down approach, Morris centers her historical account on the middle-class white women whose actions changed the political landscape of the state and ultimately the country.

Robin M. Morris: ROBIN M. MORRIS is associate professor of history at Agnes Scott College. She researches gender and the political realignment of Georgia after World War II. Her work has appeared in Entering the Fray: Gender, Politics, and Culture in the New South. She lives in Atlanta, Georgia.