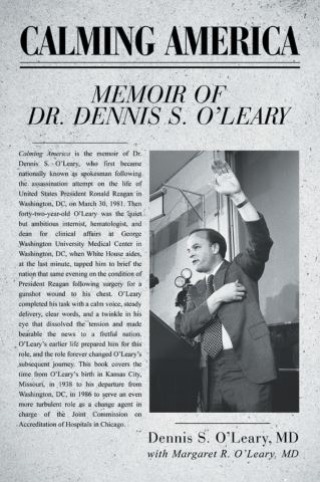 The information void in the hours following the shooting of US President Ronald Reagan late Monday afternoon, March 30, 1981, spawned many false rumors and misinformation, which White House political adviser Lyn Nofziger understood threatened the credibility of the White House. He therefore took the podium before the 200 plus assembled press in Ross Hall to tell them that he would be bringing with him a credible physician to brief them once the president was out of surgery.

However, he didn’t have many options to draw from for that credible physician. At the hospital, the surgeons tending the three shooting victims had first-hand information about the afternoon’s events, but each surgeon knew only about his own injured patient. White House physician Dan Ruge meanwhile had been at the president’s side throughout the afternoon and was a possible candidate, but his White House association made his credibility suspect according to White House aides.

The job became the drafting of the most logical person to be spokesman. That would have been the seasoned physician CEO of the George Washington University Medical Center Ron Kaufman, but he was out of town. Next up was Dennis O’Leary, the physician dean for clinical affairs, as the preferred spokesman.

To the White House, O’Leary was a total unknown, but a review of his credentials would hardly have been reassuring. He had originally been recruited to George Washington University as a blood specialist. Reticent by nature, he had minimal public-relations and public-speaking experience, save two years as a member of his hometown high school debate team. He had no surgical or trauma training or experience.

But beggars can’t be choosers, as the saying goes. Kindly stated, O’Leary was probably the least bad choice to serve as White House/hospital spokesman to inform the world of the status of the wounded President Reagan, special agent Tim McCarthy, and press secretary Jim Brady. Yet, with a little bit of luck, it might all work out. And it did.

Margaret R. O’Leary, MD, one of the first residency-

trained and board-certified emergency physicians in the US, has combined emergency medicine and publishing careers for four decades. Today Margaret enjoys reading, writing, and gardening.